In the United States, the military and navy use chevrons in the right way, (although before the 20th Century this was not true), while the Air Force, Navy, and Coast Guard used distorted chevrons. Arcs, also known as "rockers" are also added to the chevrons to show off the high quality.

In the British Armed Forces, Royal Marines and the Royal Air Force, chevrons are deployed to symbolize the position of the NCO, one with a corporal lance, two corporal, three sergeants, and three with a Staff Sergeant crown (known as Color Sergeant -infantry regiments and Royal Marines) or Flight Sergeant (RAF). Branch and culture result in a diversity of titles (Corporal of Horse equivalent to Sergeant in the Horse Army) and spelling (Serjeant in The Rifles). Large chevrons are also worn on the sleeves of sailors in the Royal Navy to show good morals rather than status. 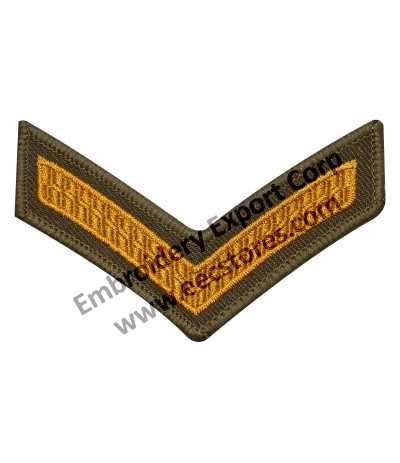